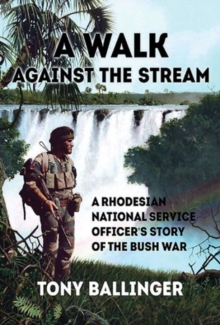 A Walk Against the Stream : A Rhodesian National Service Officer's Story of the Bush War Paperback / softback

A Walk Against The Stream takes a look at the experiences of a young national service officer in the Rhodesian army.

This is a true story, encompassing all eighteen months the author spent at Victoria Falls, Rhodesia, facing enemy territory just across the Zambezi river in Zambia. Initially allocated to 4th platoon, 4 Independent company Rhodesia Regiment (RR) as a subaltern and later on as a 1st Lieutenant in support company 2RR, the story starts with the author's training and subsequent deployment to the operational area.

The events that unfold contain interesting military encounters, with battles against the Zambian army and local terrorists clearly depicted.

The style of writing flows easily and graphically, drawing the reader into a half forgotten world. But there is also another aspect to the story: the human side of it.

It is an examination of the author's love of a country falling apart and the relationship that he forms with a local woman in the village; their love, hope and dreams snatched away by unfolding events.

This is a riveting personal tale, interspersed with interesting facts and dozens of photographs.

All the names and places are real, including the battle scenes with ZIPRA and the Zambian army.