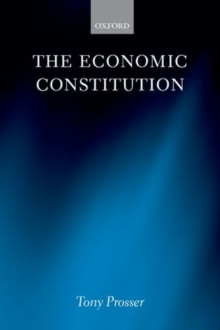 There has been little analysis of the constitutional framework for management of the UK economy, either in constitutional law or regulatory studies. This is in contrast to many other countries where the concept of an 'economic constitution' is well established, as it is in the law of the European Union. Given the extensive role of the state in attempting to resolve recent financial crises in the UK and elsewhere in Europe, it is particularly important to developsuch an analysis.

This book sets out different meanings of an economic constitution, and applies them to key areas of economic management, including taxation and public borrowing, the management of public spending, (including the Spending Review), monetary policy, financial services regulation, industrial policy (including state shareholdings) and government contracting. It analyses the key institutions involved such as the Treasury and the Bank of England, also including a number of less well-known bodies suchas the Office for Budget Responsibility. There is also coverage of the international context in which these institutions operate especially the European Union and the World Trade Organisation. It thus provides an account of the public law applying to economic management in the UK. This book also adopts a critical approach, assessing the degree to which there is coherence in the arrangements for economic management, the degree to which economic policy-making is constrained by constitutional norms, and the degree to which economic management is subject to deliberation and accountability through Parliament, the courts and other institutions.