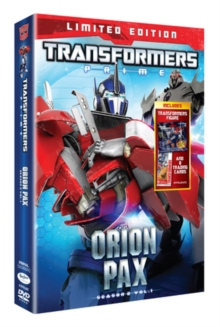 First volume of episodes from the second series of the CGI-animated franchise in which the Autobots and Decepticons return to do battle once again.

In this instalment, after his memory is erased, Optimus Prime (voice of Peter Cullen) is tricked into joining the Decepticons by Megatron (Frank Welker).

Can the Autobots successfully carry out a plan to get their leader back?