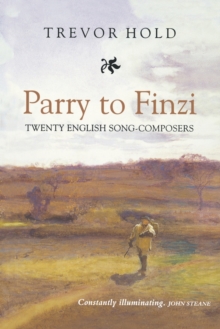 Constantly illuminating. JOHN STEANE, GRAMOPHONEThe composers in this book represent the outstanding songwriters from what we can now see as the golden age of English romantic song.

As well as the major figures - Parry, Stanford, Vaughan Williams, Quilter, Ireland, Gurney, Warlock and Finzi - there are chapters on lesser-known composers, such as Denis Browne and Charles Orr.

Detailed consideration is given to three songwriters who have suffered unaccountable neglect, Arthur Somervell, Armstrong Gibbs and Herbert Howells, and there are chapters on Elgar, Delius and Holst, whose reputations were made in other fields but whose contribution to English song is nevertheless important.

Moeran. Each chapter begins with a discussion of its composer's song-output and of the poets and poetry he sets, and goes on to give an account of the influences on him and the hallmarks of his style; the songs are then discussed in detail, focusing on the major works.

The text is illustrated with musical examples and there is a comprehensive bibliography and index. TREVOR HOLD was a composer and poet who wrote extensively on English song.