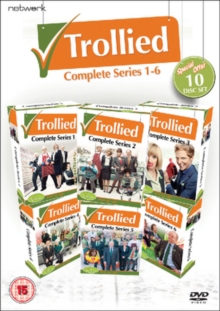 All 61 episodes from all six series of the British sitcom following the lives of those who work in a northern supermarket.

In the first series, Julie (Jane Horrocks) is appointed acting deputy manager of the supermarket Valco and sets about trying to impress store manager Gavin (Jason Watkins), who she also happens to be romantically attracted to.

The unruly staff she is supposed to manage threatens to disrupt her plans at every turn.

Whether it is the bickering of butchers, Andy (Mark Addy) and Kieran (Nick Blood), or the insubordination of elderly new start Margaret (Rita May), Julie faces a desperate battle to keep the store in order and impress Gavin.

Lorraine swiftly makes her mark by introducing the 'No Nonsense' range of economy goods and attempting to discipline the store's unruly staff.

However, keeping characters such as butchers Andy and Kieran in line is no easy task.

In the third series, with Valco supermarket under new management, Richard France (Chris Geere) arrives to bring fresh ideas to the store.

Will the pair be able to work together? And will a new arrival in the fish department and a promotion in the butcher's upset the equilibrium of both departments?

In the fourth series, a host of new recruits join the Valco team, the daughter of one of the supermarket owners takes advantage of her position, and a special guest makes a visit to the store.

In the fifth series, Valco comes under threat when store manager Gavin announces to the team that a rival discount supermarket called Lauda will be opening nearby.

Lauda manager Cheryl Fairweather (Sarah Parish) makes an impression on Gavin, who has heard of her ruthless management technique.

Gavin and his assistant manager Daniel (Samuel Anderson) devise a plan to lure their customers back and avoid the downfall of Valco.

Finally, in the sixth series, a new area manager takes control at Valco and Gavin decides to start eating more healthily after realising the amount of cheap, unhealthy food sold in the shop.