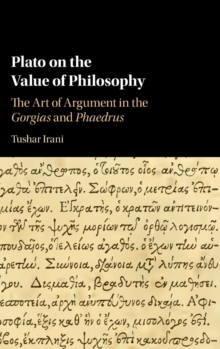 Plato on the Value of Philosophy : The Art of Argument in the Gorgias and Phaedrus Hardback

Plato was the first philosopher in the western tradition to reflect systematically (and often critically) on rhetoric.

In this book, Tushar Irani presents a comprehensive and innovative reading of the Gorgias and the Phaedrus, the only two Platonic dialogues to focus on what an 'art of argument' should look like, treating each of the texts individually, yet ultimately demonstrating how each can best be understood in light of the other.

For Plato, the way in which we approach argument typically reveals something about our deeper desires and motivations, particularly with respect to other people, and so the key to understanding his views on the proper practice of argument lies in his understanding of human psychology.

According to this reading, rhetoric done well is simply the practice of philosophy, the pursuit of which has far-reaching implications for how we should relate to others and how we ought to live.