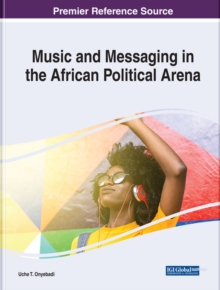 Music and Messaging in the African Political Arena Hardback

Political campaigning affects numerous realms under the communication umbrella with each channel seeking to influence as many individuals as possible.

In higher education, there is a growing scholarly interest in communication issues and subjects, especially on the role of music, in the political arena. Music and Messaging in the African Political Arena provides innovative insights into providing music and songs as an integral part of sending political messages to a broader spectrum of audiences, especially during political campaigns.

The content within this publication covers such topics as framing theory, national identity, and ethnic politics, and is designed for politicians, campaign managers, political communication scholars, researchers, and students.