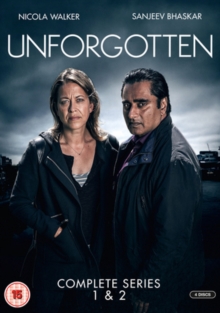 All 12 episodes of the ITV detective drama starring Nicola Walker and Sanjeev Bhaskar.

In the first series, when a skeleton belonging to a young man is discovered below a demolished building, DCI Cassie Stuart and DI Sunil Khan (Walker and Bhaskar) are brought in to lead the investigation.

After identifying the body as a homeless male named Jimmy Sullivan (Harley Sylvester), the detectives unearth the names and addresses of four possible suspects, Beth, Father Rob, Frankie C and Mr. Slater, as named in Jimmy's diary. Will any of them hold the key to solving Jimmy's death?

In the second series, the duo's next big case begins when a suitcase is washed up from the River Lea in London, containing the remains of a dead body.

After discovering the person was buried more than 25 years ago and learning his identity, the pair quickly identifies a list of four potential suspects who all have interlinked connections to the deceased.

As they try to discover what life was like for the victim, David Walker, all those years ago, Cassie and Sunil find themselves investigating historical allegations of abuse, rape and cover-ups in their search for his killer.