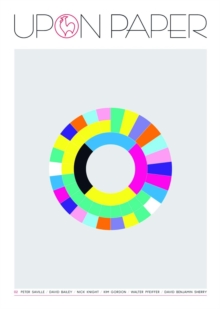 Published twice-yearly, and housed in a paper box, Upon Paper is a new large-format periodical offering a platform for works on paper and general cultural debate.

Each issue is devoted to a single theme; the theme for this inaugural issue is Los Angeles.

Artists including Robert McNally and Rinus Van de Velde have created exclusive artworks for the issue; collector and publisher, Christian Boros and Julia Zange enthuse about "real" bookmaking in the era of the iPad; Californian artist Doug Aitken discusses his work; Beach Boys expert Jon Stebbins writes about the creation of perhaps the most long awaited album in the history of pop music, SMiLE; and we encounter the new, intelligent Hollywood in Sofia and Roman Coppola's "Directors' Bureau."