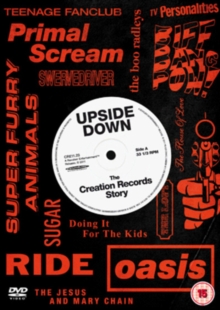 Upside Down - The Story of Creation Records DVD

Primal Scream, Oasis, Super Furry Animals and Teenage Fanclub were among the acts signed to the label that folded in 1999, after 16 years as a defining force within the British music industry.

Contributors to the documentary include Alan McGee, founder of the label, and the novelist Irvine Welsh.