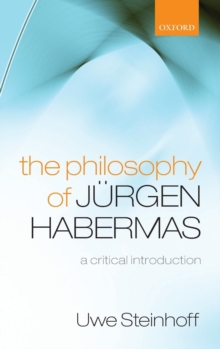 The Philosophy of Jurgen Habermas : A Critical Introduction Hardback

by Uwe (Assistant Professor, Department of Politics and Public Administration, University of Steinhoff

Jurgen Habermas seeks to defend the Enlightenment and with it an emphatical", uncurtailedconception of reason against the post-modern critique of reason on the one hand, and against so-called scientism (which would include critical rationalism and the greater part of analytical philosophy) on the other.

Habermas wants to offer an alternative, trying to develop a theory of communicative action that can clarify the normative foundations of a critical theory of societyas well as provide a fruitful theoretical framework for empirical social research. This study is a comprehensive and detailed analysis and sustained critique of Habermas' philosophical system since his pragmatist turn in the seventies.

It clearly and precisely depicts Habermas' long chain of arguments leading from an analysis of speech acts to a discourse theory of law and the democratic constitutional state.

Along the way the study examines, among other things, Habermas' theory of communicative action, transcendental and universal pragmatics and the argument from"performative contradictions", discourse ethics, the consensus theory of truth, Habermas' ideas on developmental psychology, communicative pathologies and social evolution, his theory of social order, the analysis of the tensions between system and lifeworld, his theory of modernity, and his theory ofdeliberative democracy.

For all Habermas students this study will prove indispensable.