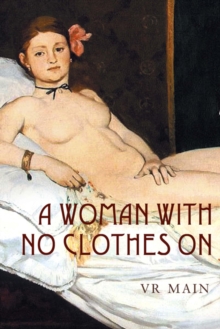 A Woman with No Clothes on Hardback

Edouard Manet creates a scandal in the 19th century art world with his paintings Le dejeuner sur l'herbe and Olympia.

In each of them, the naked model is an eighteen-year old Parisian Victorine Meurent.

Critics ridicule the works, dismissing Victorine as a common prostitute.

But, in a world utterly dominated by men, she harbours a secret ambition to become a painter.

Victorine works in bars and tries to teach herself to paint.

Throughout her sexual encounters, she retains her ruthless obsession with her ambition.

The aristocratic Manet and the working class Victorine share a passion for art and a longing for success.Tormented by jealousy, sexual tensions develop between them which are reflected in the final painting Olympia.

Main creates the characters and the atmosphere of 1860s Paris with a compelling simplicity that renders them authentic.

Victorine's bitter struggle to emerge from her background contrasts sharply with the esoteric exchanges between Manet and his friend Baudelaire on the nature of modernism.

The events of 1862 and 1863 are narrated alternately by Manet and Victorine Meurent.