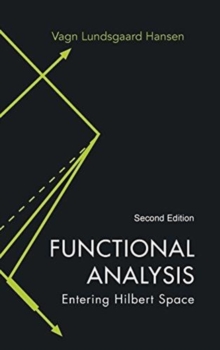 It exhibits a construction of the space of pth power Lebesgue integrable functions by a completion procedure with respect to a suitable norm in a space of continuous functions, including proofs of the basic inequalities of Hoelder and Minkowski.

The Lp-spaces thereby emerges in direct analogy with a construction of the real numbers from the rational numbers.

This allows grasping the main ideas more rapidly. Other important Banach spaces arising from function spaces and sequence spaces are also treated.In this second edition, I have expanded the material on normed vector spaces and their operators presented in Chapter 1 to include proofs of the Open Mapping Theorem, the Closed Graph Theorem and the Hahn-Banach Theorem.

The material on operators between normed vector spaces is further expanded in a new Chapter 6, which presents the basic elements of the theory of Fredholm operators on general Banach spaces, not only on Hilbert spaces.

This requires that we develop the theory of dual operators between Banach spaces to replace the use of adjoint operators between Hilbert spaces.With the addition of the new material on normed vector spaces and their operators, the book can serve as a general introduction to functional analysis viewed as a theory of infinite dimensional linear spaces and linear operators acting on them.