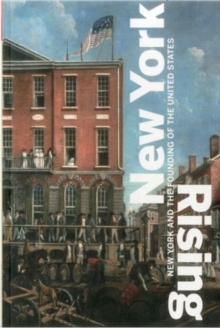 Published in conjunction with the opening of the New-York Historical Society's newly installed permanent gallery, 'New York Rising: New York and the Founding of the United States' seeks to capture this nascent moment in America's history. Featuring paintings, sculpture, historical documents and other fascinating artefacts, this fully illustrated book details important moments in both the history of New York and of the United States.

These include occupation of New York by the British Army during the Revolutionary War; the city's role as marketplace and centre of commerce; the inauguration of George Washington as first President of the United States; the politically-charged duel fought by Alexander Hamilton and Aaron Burr; and the establishment of the New-York Historical Society.

Associations are made between the paintings and the objects in the exhibition that set in context these events and the individuals who shaped and were shaped by them.