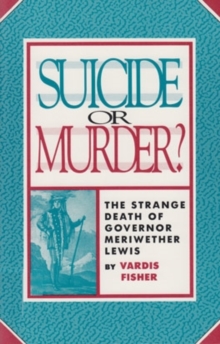 Suicide Or Murder : The Strange Death Of Paperback / softback

The death of Meriwether Lewis is one of the great mysteries of American history.

Was he murdered at Grinder's Stand or did he commit suicide?

Vardis Fisher meticulously reconstructs the events and presents his own version of the case with the precision and persuasiveness of a fine trial lawyer.

But Fisher was also a great novelist and it is his sense of character that serves him best here.

We know Lewis' complex sensibility as well as we know that of any man of his time - his Journals are so self-revealing, so exacting in the record they make of his musings, doubts, and elations.

Fisher offers us this complex Lewis and, with equal perceptiveness, sets the rough, frontier scene at Grinder's Stand.

The result is a fine mystery, well solved, that leans toward tragedy.