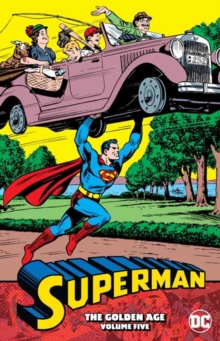 The Man of Steel was in his Golden Age, and with each new story, Jerry Siegel and Joe Shuster were continuing to expand and enrich the world of their still-relatively new creation.

In these early adventures, Superman faces the Emperor, whose nonresistance ray enables him to take over the presidency; a renegade scientist who controls darkness; a notorious pirate who has mysteriously returned; Mr. Sinister, who uses a secret ray to hijack entire buildings, and more.

Plus, Superman s foe the Prankster makes his debut, and Lex Luthor survives the electric chair! And Clark Kent goes to the movies and sees his costumed alter ego leap into action in an animated cartoon.