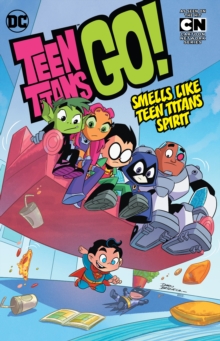 Based on the hit animated series! It's time for more wild adventures starring the coolest superheroes around in Teen Titans Go!

Vol. 4! First, Beast Boy is ready to save the world using his new super-power--the power to smell the future!

Then, is Robin really the fulfillment of an ancient prophecy?

Can the team answer the Justice League's call and take on the not-so-awesome responsibility of babysitting an infant Superman...

Superbaby? And when a punk rock supervillain sentences Jump City to death by rock and roll, only the musical stylings of the Teen Titans can stop him! From the beach to H.I.V.E. Tower to the Titans Tower bathroom, the Teen Titans are here to save the day in these and more all-ages stories in Teen Titans Go!