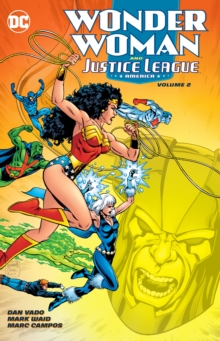 Comics writers Mark Waid and Dan Vado are joined by Marc Campos and a team of veteran artists as they present one of the most action-packed stories in Justice League history with WONDER WOMAN & JUSTICE LEAGUE AMERICA VOL. 2. With Wonder Woman leading the Justice League America, the team has had to battle enemies from within and outside threats too big for any one hero.

Now they have to contend with the return of the Overmaster and his Cadre, who are more powerful than ever before.

The only way to defeat this cosmic threat is for Wonder Woman and her team to join forces with the Justice League International and Justice League Task Force!