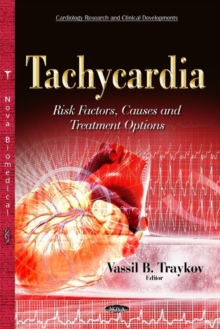 Edited by Vassil B. Traykov

This is an edited collection covering a wide range of topics in the field of tachyarrhythmias.

Among them is the general approach to the patient with supraventricular tachycardia.

The management of patients with atrial fibrillation has also been extensively covered.

The important topic of differential diagnosis of wide QRS tachycardia has been touched upon as well with a comprehensive and well-illustrated review.

Special emphasis has been put on the assessment of the risk for sudden cardiac death in patients with ischaemic and non-ischaemic dilated cardiomyopathy.

The chapters covering these topics provide a useful update to the novel risk factors that might help to better assess the sudden cardiac death risk.

A substantial part of the book is devoted to catheter ablation of arrhythmias as a non-pharmacological treatment option.

The approach to catheter ablation of narrow QRS tachycardias and typical atrial flutter has been reviewed in detail.

Another detailed review summarises the methods for catheter ablation of atrial fibrillation starting from the very introduction of this technique and ending with the current state-of-the-art technology used to successfully ablate atrial fibrillation.

The approach to catheter ablation of ventricular tachyarrhythmias in structurally normal hearts and in the presence of structural heart disease has been described in a series of two chapters.

Last but not least, the book reviews the role of implantable cardioverter-defibrillators (ICD) in the prevention of sudden cardiac death.

It focuses on the current indications for implantation and also describes some basic principles in device programming.

With the wide area of topics that are covered by the different chapters, this book is interesting to fellows, clinical cardiologists and electrophysiologists and all physicians involved in the diagnosis and treatment of cardiac arrhythmias.