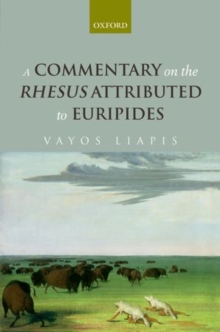 A Commentary on the Rhesus Attributed to Euripides Hardback

Rhesus, a tragedy traditionally (but wrongly) attributed to Euripides, has been the object of too little scholarly attention over the last decades.

While debate has focused largely on the question of the play's authenticity, consequently overlooking the features of the play itself, this important new commentary explores the essential elements such as language, style, character-portrayal, and metre.

The play's stagecraft and plot-construction are scrutinizedand shown to be generally idiosyncratic and often defective despite occasional flashes of genius in the handling of dramatic time and theatrical space.

Through the detailed introduction, translation, and commentary, Liapis shows that Rhesus is largely derivative, as it contains a significant amount of textual material taken from other classical tragedies and genres.

The conclusion is that the contested author's familiarity with fifth-century drama bespeaks a professional actor, probably one specializing in re-performances of classical repertoire. Such evidence suggests that Rhesus can therefore be considered as not only asurviving fourth-century tragedy, but also one conceived for performance outside of Athens.