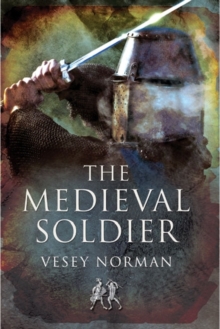 The author outlines the development of the undisciplined barbarian war bands of the Dark Ages into the feudal armies of the early Middle Ages.

It deals with the arms and equipments of the soldier, not only from surviving specimens but also from descriptions in contemporary medieval documents.

Vesey Norman covers the slow development of tactics and the transition of the warrior from a personal follower of a war leader to the knight who served his feudal overlord as a heavily armoured cavalryman in return for land.He details the attitude of the Church to warfare, the rise of chivalry and the development of the knights of the military orders, the Templars, the Hospitallers and the Teutonic Knights.

He answers such questions as what classes of men made up the army, who commanded them, and how they were equipped, paid and organized.

Since armies frequently has to be transported by water, a brief description of contemporary ships in included.Vesey Norman was born in Delhi on 1930.

He was educated at Trinity College, Glenalmond, Perthshire and London University, and has been Assistant to the Director of the Wallace Collection, in charge of the armouries.He is a Fellow of the Society of Antiquaries of London & Scotland, and has visited most of the major collections of Europe. He is the author of Arms and Armour, Warrior to Soldier 449 to 1660, and Small Swords and Military Swords, and has contributed articles to a number of magazine.