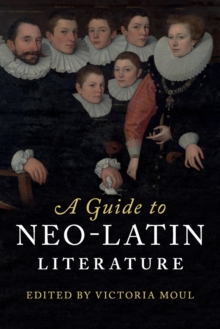 Latin was for many centuries the common literary language of Europe, and Latin literature of immense range, stylistic power and social and political significance was produced throughout Europe and beyond from the time of Petrarch (c.1400) well into the eighteenth century.

This is the first available work devoted specifically to the enormous wealth and variety of neo-Latin literature, and offers both essential background to the understanding of this material and sixteen chapters by leading scholars which are devoted to individual forms.

Each contributor relates a wide range of fascinating but now little-known texts to the handful of more familiar Latin works of the period, such as Thomas More's Utopia, Milton's Latin poetry and the works of Petrarch and Erasmus.

All Latin is translated throughout the volume.