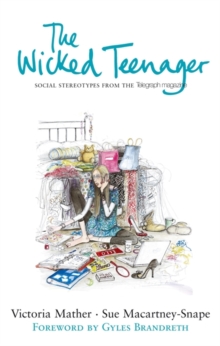 Poppy is the epitome of cool, wondering as she varnishes her toenails, if she should have a little dolphin tattooed on her ankle.

Besides being long, books are not quite so cool - what she really needs are her friend's notes.

Downloading songs on to her iPod and reading Hello! instead of doing her A-level revision, Poppy fobs off her despairing parents by telling them that Google's ace for research on As You Like It.

Whatever: she'll get an A. Social Stereotypes has itself just become a teenager and in this new collection Victoria Mather and Sue Macartney-Snape return pin-sharp in their aim to immortalize the characters de nos jours.

From Krystal and Craig practising the samba at the Palais de Glide and dreaming of being on the telly, to the Compost Enthusiasts Constance and Caroline, by way of Hedge Funder Giles - with a house within the congestion zone, a Euro-wife with collagen implants, a 4 x 4 for the Croatian nanny and a Riva - every aspect of contemporary life is covered.

It's impossible to resist being drawn in by the sparklingly mischievous prose and hilariously accurate illustrations of these stereotypes from the Telegraph Magazine.

You will join the ever-increasing number of fans already officially classed as the Totally Hooked.