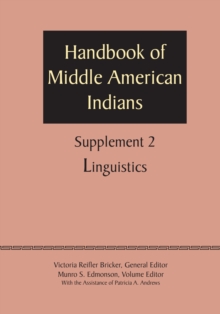 The sixteen-volume Handbook of Middle American Indians, completed in 1976, has been acclaimed the world over as the single most valuable resource ever produced for those involved in the study of Mesoamerica.

When it was determined in 1978 that the Handbook should be updated periodically, well-known cultural anthropologist Victoria Reifler Bricker was selected to be general editor. This second volume of the Supplement is devoted to Mesoamerican languages.

It differs in both scope and content from its forerunner, Volume 5 of the Handbook of Middle American Indians: Linguistics, which presents a general survey of Middle American linguistics and descriptions of Classical Nahuatl, Yucatec, Quiche, Popoluca, Zapotec, Mazatec, Pame, and Chontal de Oaxaca. The aim of the present volume is to provide detailed sketches of five additional languages: Mixe, Chichimeco Jonaz, Cholti, Tarascan, and Huastec.

All the grammatical sketches deal with the phonology, morphology, and syntax of the languages treated; most cover discourse as well.

Taken together, these new essays represent a substantial enrichment of the earlier Handbook volume on linguistics.

Alone, the Supplement stands as an invaluable reference guide for all who are interested in learning about these important and heretofore poorly treated languages of Middle America.