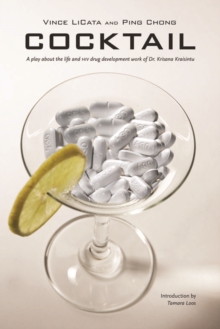 Dr. Krisana Kraisintu was awarded the prestigious Ramon Magsaysay award for public service, Asia's equivalent to the Nobel Peace Prize, in July 2009. Cocktail is a play about one woman's audacious crusade to fight the AIDS epidemic and the pharmaceutical industry's unyielding control over lifesaving drugs.

Scientist-activist Dr. Krisana Kraisintu, a Thai national, defied politicians, patents, and restrictions to give the world its first generic "cocktail" pill for the treatment of HIV/AIDS.

Her generic drugs changed the course of HIV in her native Thailand and later in Africa, but brought her into direct conflict with some of the world's leading drug manufacturers. The play powerfully dramatizes the worldwide explosion of AIDS and Dr. Krisana's visionary work, from her research in a windowless storage room mixing and combining toxic raw materials in grueling solitary toil, to her confrontation with corporate greed and political corruption, and ultimately to her single-handedly saving millions of lives. Cocktail is a mesmerizing experience of Kraisintu's life that is in turns spine chilling, lyrical, heartbreaking, and funny, yet ultimately humbling and inspiring.