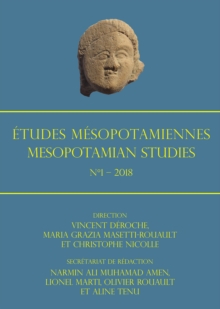 It contains the first results of some excavation and survey programs carried out by different European teams namely in the Kurdistan region of Iraq, developed since the reopening of this large territory to international research after the long pause due to war.

The volume includes also studies, debates, reflections preparing and illustrating the new trends of the research launched now in Mesopotamia.

Marked by the continuity of the scientific traditions, they show the changes induced by the evolution of mentalities and by new methods, techniques and instruments of work.

The proceedings of an international congress held in Paris in 2013, show also the orientation of Iraqi archaeologists' researches, and their perceptions of the new, possible collaboration starting now in the region.

In the same spirit, to allow a better circulation and sharing of their contents, the texts are accompanied by large summaries translated into Arabic and Kurdish.