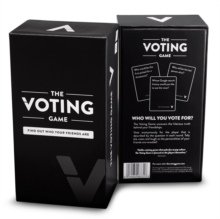 The Voting Game is a party game that uncovers the hilarious truth behind your friendships!

Play begins when the first question card is revealed, e.g., Who regularly orders delivery from less than 5 blocks away?

Players then vote anonymously for the player that is best described by the question.

Results are tallied and revealed to the group. Each player then guesses who voted for him or her. Players get one guess for every vote they received. If they guess correctly, the truth is revealed. Great game, you need to know who you are playing with, but do not play with your work mates!