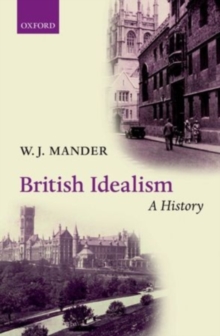 W. J. Mander presents the first ever synoptic history of British Idealism, the philosophical school which dominated English-language philosophy from the 1860s through to the early years of the following century.

Offering detailed examination of the origins, growth, development, and decline of this mode of thinking, British Idealism: A History restores to its proper place this now almost wholly forgotten period of philosophical history.

Through clearexplanation of its characteristic concepts and doctrines, and paying close attention to the published works of its philosophers, the volume provides a full-length history of this vital school for those wishing to fill a gap in their knowledge of the history of British Philosophy, while its detailed notes andbibliography will guide the more dedicated scholar who wishes to examine further their distinctive brand of philosophy.

By covering all major philosophers involved in the movement (not merely the most famous ones like Bradley, Green, McTaggart, and Bosanquet but the lesser known figures like the Caird brothers, Henry Jones, A.S.Pringle-Pattison, and R.B.Haldane) and by looking at all branches of philosophy (not just the familiar topics of ethics, political thought, and metaphysics but also theless well documented work on logic, religion, aesthetics, and the history of philosophy), British Idealism: A History brings out the movement's complex living pattern of unity and difference; something which other more superficial accounts have tended to obscure.