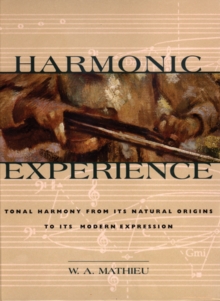 An exploration of musical harmony from its ancient fundamentals toits most complex modern progressions, addressing how and why it resonatesemotionally and spiritually in the individual. W. A. Mathieu, an accomplished author and recording artist, presentsa way of learning music that reconnects modern-day musicians with the sourcefrom which music was originally generated.

As the author states, "The rules of music--including counterpoint and harmony--were not formed in our brains but in the resonance chambers of our bodies." His theory of music reconciles the ancient harmonic system of just intonation with the modern system of twelve-tone temperament.

Saying that the way we think music is far fromt he way we do music, Mathieu explains why certain combinations of sounds are experienced by the listener as harmonious.

His prose often resembles the rhythms and cadences of music itself, and his many musical examples allow readers to discover their own musical responsesAn accomplished recording artist, author, and teacher presents an in-depth look at the way we experience musical harmony.