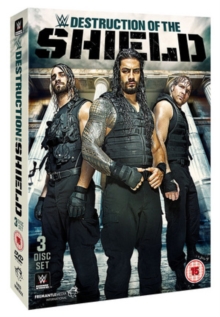 WWE: The Destruction of the Shield DVD

Collection of footage detailing the rise and fall of WWE group The Shield, made up of Dean Ambrose, Seth Rollins and Roman Reigns.

Since their debut in November 2012, The Shield dominated six-man tag matches and became a force to be reckoned with in the world of professional wrestling until their disbanding in June 2014.