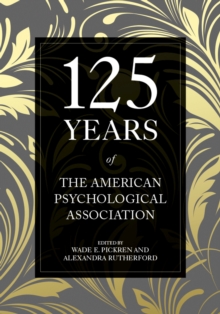 This volume, first published as part of the American Psychological Association's centennial celebration in 1992 and updated today for the APA's 125th anniversary, demonstrates how the Association has evolved over the years in response to intellectual, cultural, political, economic, and other historical developments. Chapters describe the personalities and events that transformed the APA from a tiny organization of 26 members to one of the largest professional associations in the world. Key topics include the changing role of women in the APA, and the organization's considerable contributions to social change.

From its origins in the late nineteenth century, through the two World Wars and a major reorganization, to the social and cultural turbulence of the 1960s and the economic uncertainties of the 1970s and 1980s, the APA's development has mirrored the growth of psychology as a discipline in the United States. This special 125th anniversary edition describes the unique challenges and triumphs that have marked the APA's early years in the twenty-first century.