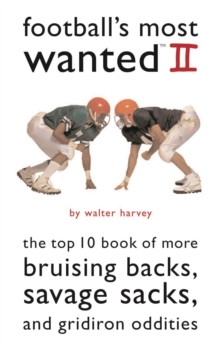 Readers will score a touchdown at their tailgate parties with Football's Most Wanted (TM) II: The Top 10 Book of More Bruising Backs, Savage Sacks, and Gridiron Oddities by Walter Harvey.

With fun facts and amazing anecdotes from professional and college football, it's sure to delight fans new and old while presenting a wealth of interesting and amusing tidbits and trivia. Harvey takes over in the second half after a stellar performance by the starter, Football's Most Wanted (TM), and is poised to lead your team to victory.

With more than fifty additional top-ten lists on a plethora of pigskin possibilities, there's something here for everybody.

Harvey includes information on some of the greatest gridiron rivalries, amazing football streaks and records, the youngest coaches and oldest players, famous and defunct college football bowls, coaches who both excelled and failed when making the jump from college to the pros, and the most entertaining touchdown celebrations.

He touches on footballers who go into commercials, introduces the famous"other halves" of football players, and even details ten of the longest scoring plays in NFL history. Football's Most Wanted (TM)II: The Top 10 Book of More Bruising Backs, Savage Sacks, and Gridiron Oddities is a sure score for every fan.