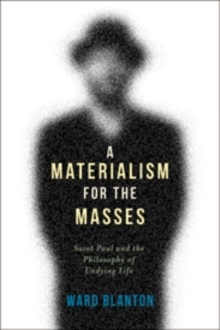 A Materialism for the Masses : Saint Paul and the Philosophy of Undying Life Paperback / softback

Nietzsche and Freud saw Christianity as metaphysical escapism, with Nietzsche calling the religion a "Platonism for the masses" and faulting Paul the apostle for negating more immanent, material modes of thought and political solidarity.

Integrating this debate with the philosophies of difference espoused by Gilles Deleuze, Michel Foucault, Jacques Derrida, Jacques Lacan, and Pier Paolo Pasolini, Ward Blanton argues that genealogical interventions into the political economies of Western cultural memory do not go far enough in relation to the imagined founder of Christianity. Blanton challenges the idea of Paulinism as a pop Platonic worldview or form of social control.