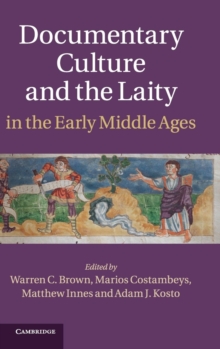 Documentary Culture and the Laity in the Early Middle Ages Hardback

Many more documents survive from the early Middle Ages than from the Roman Empire.

Although ecclesiastical archives may account for the dramatic increase in the number of surviving documents, this new investigation reveals the scale and spread of documentary culture beyond the Church.

The contributors explore the nature of the surviving documentation without preconceptions to show that we cannot infer changing documentary practices from patterns of survival.

Throughout Late Antiquity and the early Middle Ages - from North Africa, Egypt, Italy, Francia and Spain to Anglo-Saxon England - people at all social levels, whether laity or clergy, landowners or tenants, farmers or royal functionaries, needed, used and kept documents.

The story of documentary culture in the early medieval world emerges not as one of its capture by the Church, but rather of a response adopted by those who needed documents, as they reacted to a changing legal, social and institutional landscape.