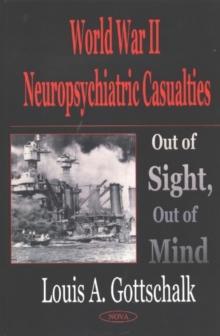 World War 2 Neuropsychiatric Casualties : Out of Sight, Out of Mind Hardback

This is a unique book for two reasons: it focuses on neuropsychiatric casualties of war, a topic that has traditionally been avoided in the media and documentary literature; and, it is based on the personal observations of a single person, the author, who served as a military neuropsychiatrist at the United States Public Health Service Hospital in Fort Worth, Texas from 1944 to 1946, where he personally diagnosed and treated over 1500 neuropsychiatric patients.

The development of a mental disorder triggered by the stress of military service, is often regarded publicly as a shameful event, not only for the patient but also for his or her family.

On the other hand, getting killed or injured during military action is usually considered praiseworthy and honourable.

The book describes some of the diverse stressors experienced by neuropsychiatric patients ranging from the quality of life in a submarine undergoing depth bombing, the exposure to suicidal fighters attacking their battleship, to the experiences of going on repeated bombing missions while coping with diverse enemy defences.

For some new enlistees, only the initial regimentation in a boot camp was sufficient to produce a mental breakdown.

The emotional pains and sufferings of these mentally disturbed patients raise the question why do human beings have wars in the first place?

Each of the deadly opponents believes that their God favours their violent intentions on their enemy.

All of these mentally disordered patients were taught as infants and children to nurture and protect one another and during this war, as in all wars, their job description was to defeat and destroy others.

The author suggests that a mental disorder, in such a conflicted and chaotic world, should not be surprising.

The resultant covering up and association with shame reveal that the proclivity of humans beings to violent disagreements and fatal battles are genetic predispositions which are as strong as their inborn and learned altruistic virtues of caring and loving.