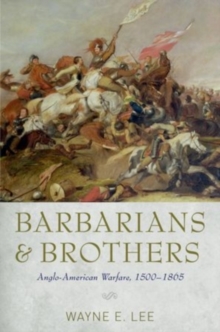 The most important conflicts in the founding of the English colonies and the American republic were fought against enemies either totally outside of their society or within it: barbarians or brothers.

In Barbarians and Brothers, historian Wayne Lee presents a searching exploration of early modern English and American warfare, looking at such conflicts as the sixteenth-century wars in Ireland, the English Civil War, the colonial Anglo-Indian wars, theAmerican Revolution, and the American Civil War.

Lee discusses these conflicts through compelling campaign narratives, exploring the lives and fears of soldiers as well as the strategies of their commanders, while showing how their collective choices determined the nature of wartime violence. In the end, therepeated experience of wars with barbarians or brothers created an American culture of war that demands absolute solutions: enemies are either to be incorporated or rejected, included or excluded. And that determination plays a major role in defining the violence used against them. Even within such absolute goals, however, Lee points to the ways that war continued to be defined by both violence and restraint.

He offers a multi-faceted account of three centuries ofAnglo-American warfare, revealing how a variety of factors either fueled or curbed the violence directed towards an enemy.