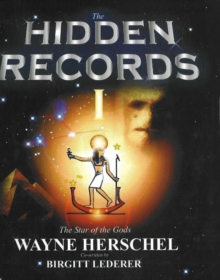 Hidden Records : The Star of the Gods Paperback / softback

Wayne Herschel, in a culmination of 15 years of research on archaeo-astronomy, has unravelled an extraordinary secret.

It identifies the origins of Leonardo Da Vinci's 'Vitruvian man' human blueprint code with Stonehenge and the pyramid sites around the world.

Herschel stumbled on 'Da Vinci's secret geometry' at Giza in Egypt and realised that all 50 of the pyramids of Lower Egypt appear to represent the brightest stars forming constellations along the length of the Milky Way.

But more importantly, there is the proverbial x that marks the spot and that claims cryptically that human lineage is associated with what appears to be another Sun-like star.

The author also proves that Stonehenge has the same cosmic solution and that the pyramid layouts of the Maya, the Incas, the Khmer and many others around the world, all repeat the same star map theme.

They all exhibit the same obsession with one nearby Sun-like star in Taurus, a star that the ancients passionately refer to as the star of their gods.

This full-colour glossy book takes the reader on a riveting journey from one clue to the next, presenting numerous forgotten ancient texts and artefacts. "The Hidden Records" presents the strongest evidence to date that humans have never ever been alone in this vast universe.