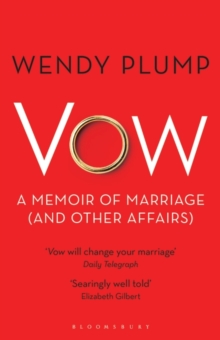 Vow : A Memoir of Marriage (and Other Affairs) Paperback / softback

There are so many ways to find out. From a mobile phone. From a bank account. From some weird supermarket encounter. One morning in early January 2005, Wendy Plump's neighbour came over to tell her that her husband was having an affair.

The news hit her with an almost audible click. It was not a shock. Actually, it explained quite a lot. What she was not prepared for however was the revelation that he had an eight-month-old son living within a mile of their family home. Monogamy is one of the most important vows we make in our marriages.

Yet it is a rare spouse who does not face some level of temptation in their married life.

The discovery of her husband's second family followed betrayals of Wendy's own, earlier in the marriage, and prompted her to explore the wreckage of her relationship head-on - from the view of both the betrayer and the betrayed. In this compelling memoir, Wendy Plump looks at the ordeal of Finding Out, the recovery, the ebb and flow of passion, the patterns of adultery, the undeniable allure of illicit attraction, the lovers, the lies and the alibis.

Frank, intelligent and important, Vow takes you under the covers.

It will transform your understanding of fidelity and commitment forever.