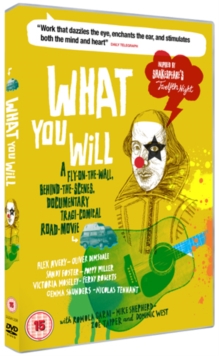 What You Will DVD

An anarchic improvised drama-cum-documentary following the actors in a young theatre company as they try to stage their radical reinvention of 'Twelfth Night'.

Treading a fine line between fact and fiction, the narrative revolves around the leading players' attempts to deal with a cast member's colossal self-importance, which threatens to derail not only the show, but the company itself.

With the actual performance of 'Twelfth Night' having been shot live and incorporated into the fly-on-the-wall narrative, the rising tensions between the cast and their determination to carry on no matter what, soon begin to mirror the central themes of the play, further blurring the line between reality and fiction.