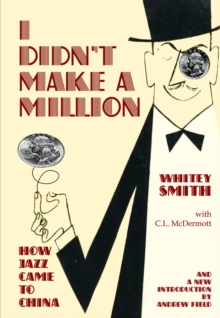 I Didn't Make a Million : How Jazz Came to China, with a New Foreword by Andrew Field Paperback / softback

Whitey Smith was a jazz drummer from San Francisco who landed in Shanghai in 1922, just in time to help ignite the Jazz Age in one of the world's most entertainment-crazed cities.

It is said he brought Jazz to China, and that claim is arguably true.

This memoir tells the story of his amazing life and adventures in Shanghai nightlife in the 1920s and 1930s, and then as a nightclub owner and internee in a Japanese camp during World War II.