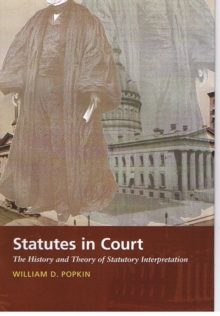 Statutes in Court : The History and Theory of Statutory Interpretation Hardback

How do judges determine the meaning of laws? The extent to which judges should exercise their discretion in interpreting legislation has been a contentious issue throughout American history, involving questions about the balance of power between the legislature and the judiciary.

He then maps the evolving conceptions of the judicial role in the United States from Revolutionary times through the twentieth century before presenting his "ordinary judging" theory-one that asks the judge to use modest judicial discretion to assist the legislature in implementing good government.

Claiming that theory cannot account for everything a judge does when determining statutory meaning or writing an opinion, Popkin shows how judges who strive to be conscientious in interpreting the law are often hampered by the lack of both a framework in which to fit their approach and a well-understood common vocabulary to explain what they do.

Statutes in Court fills that gap. This work will be valuable to anyone concerned about the judicial role in the interpretation of laws-from judiciary officials and law professors to legal historians and political scientists. 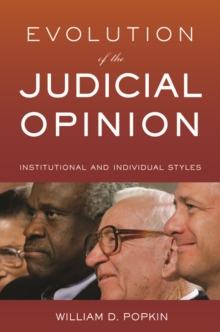 Evolution of the Judicial Opinion