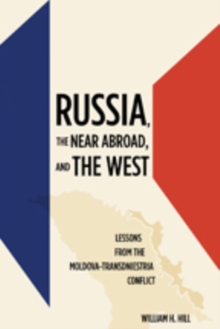 Russia, the Near Abroad, and the West : Lessons from the Moldova-Transdniestria Conflict Hardback

Post-communist Russia turned against the West in the 2000s, losing its earlier eagerness to collaborate with western Europe on economic and security matters and adopting a suspicious and defensive posture.

This book, investigating a diplomatic negotiation involving Russia and the formerly Soviet Moldova, explains this dramatic shift in Russian foreign policy. William H. Hill, himself a participant in the diplomatic encounter, describes a key episode that contributed to Russia's new attitude: negotiations over the Russian-leaning break-away territory of Transdniestria in Moldova-in which Moldova abandoned a Russian-supported settlement at the last minute under heavy pressure from the West.

Hill's first-hand account provides a unique perspective on historical events as well as information to assist scholars and policymakers to evaluate future scenarios.

When western leaders blocked what they saw as an unworkable settlement in a small, remote post-Soviet state, Kremlin leaders perceived a direct geopolitical challenge on their own turf.

This event colored Russia's interpretations of subsequent western intervention in the region-in Georgia after the Rose Revolution, Ukraine in 2004, Kyrgyzstan, Uzbekistan, and elsewhere throughout the former Soviet empire.