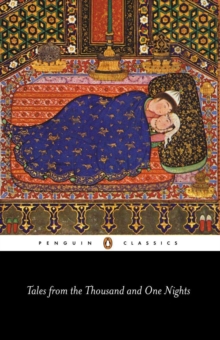 Tales from the Thousand and One Nights Paperback / softback

Offering unexpurgated translations of the best-loved tales, including such classics as 'Sindbad the Sailor', Tales from the Thousand and One Nights - sometimes known as the Arabian Nights - is translated with an introduction by N.J.

Dawood in Penguin Classics. The tales told by Scheherazade over a thousand and one nights to delay her execution by the vengeful King Shahryar have become among the most popular in both Eastern and Western literature.

From the epic adventures of 'Aladdin and the Enchanted Lamp' to the farcical 'Young Woman and her Five Lovers' and the social criticism of 'The Tale of the Hunchback', the stories depict a fabulous world of all-powerful sorcerers, jinns imprisoned in bottles and enchanting princesses.

But despite their imaginative extravagance, the Tales are also anchored to everyday life by their bawdiness and realism, providing a full and intimate record of medieval Eastern world. In this selection, N.J. Dawood presents the reader with an unexpurgated translation of the finest and best-known tales, preserving their spirited narrative style in lively modern English.

In his introduction, he discusses their origins in the East and their differences from Classical Arabic literature, and examines English translations of the tales since the eighteenth century. If you enjoyed Tales from the Thousand and One Nights, you might like Snorri Sturlson's The Prose Edda, also available in Penguin Classics.