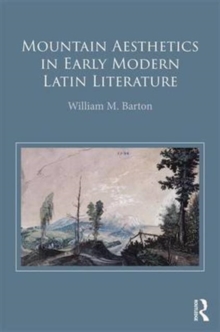 An important part of this change occurred in the way that beauty was perceived in the natural world and in the particular features which became privileged objects of aesthetic gratification.

This study explores the shift in aesthetic attitude towards the mountain that took place between 1450 and 1750.

Over the course of these 300 years the mountain transformed from a fearful and ugly place to one of beauty and splendor.

Accepted scholarly opinion claims that this change took place in the vernacular literature of the early and mid-18th century.

Based on previously unknown and unstudied material, this volume now contends that it took place earlier in the Latin literature of the late Renaissance and Early Modern period.

The aesthetic attitude shift towards the mountain had its catalysts in two broad spheres: the development of an idea of 'landscape' in the geographical and artistic traditions of the 16th century on the one hand, and the increasing amount of scientific and theological investigation dedicated to the mountain on the other, reaching a pinnacle in the late 17th and early 18th centuries.

The new Latin evidence for the change in aesthetic attitude towards the mountain unearthed in the course of this study brings material to light which is relevant for the current philosophical debate in environmental aesthetics.

The book's concluding chapter shows how understanding the processes that produced the late Renaissance and Early Modern shift in aesthetic attitude towards the mountain can reveal important information about the modern aesthetic appreciation of nature.

Alongside a standard bibliography of primary literature, this volume also offers an extended annotated bibliography of further Latin texts on the mountains from the Renaissance and Early Modern period.

This critical bibliography is the first of its kind and constitutes an essential tool for further study in the field.