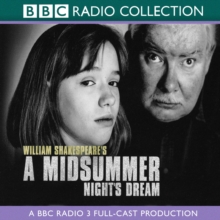 In this BBC full-cast production of A Midsummer Night's Dream, Hermia, Lysander, Demetrius and Helena run to the woods and stumble into a life separate from time itself. Fairy magic wreaks havoc and midsummer madness takes over as lovers tread the delicate line between fantasy and reality. Sylvestra le Touzel stars as Titania in this delightful comic fantasy, with Samuel West as Lysander, David Threlfall as Theseus, Richard Griffiths as Bottom and Becky Simpson as Puck. BBC radio has a unique heritage when it comes to Shakespeare.

Since 1923, when the newly-formed company broadcast its first full-length play, generations of actors and producers have honed and perfected the craft of making Shakespeare to be heard.

In this acclaimed BBC Radio Shakespeare series, each play is introduced by Richard Eyre, former Director of the Royal National Theatre.

Revitalised, original and comprehensive, this is Shakespeare for the modern day.