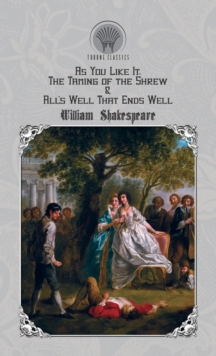 As You Like It, The Taming of the Shrew & All's Well That Ends Well Hardback

As You Like It is a pastoral comedy by William Shakespeare based on the novel Rosalynde by Thomas Lodge, believed to have been written in 1599 or early 1600. It features one of Shakespeare's most famous and oft-quoted lines, "All the world's a stage", and has been adapted for radio, film, and musical theatre.

The Taming of the Shrew is a comedy by William Shakespeare. It was one of his earlier plays, believed to have been written between 1590 and 1594. The play begins with a framing device in which a drunkard is deceived into thinking he is a nobleman who then watches the "play" itself, which depicts a nobleman, Petruchio, who marries an outspoken, intelligent, and bad-tempered shrew named Katherina. Petruchio manipulates and "tames" her until she is obedient to his will. The main subplot features the courting of Katherina's more conventional sister Bianca by numerous suitors.

All's Well That Ends Well is a play by William Shakespeare, originally classified as a comedy, though now often counted as one of his problem plays, so-called because they cannot be easily classified as tragedy or comedy. It was probably written in later middle part of Shakespeare's career, between 1601 and 1608, and was first published in the First Folio in 1623.

The name of the play comes from the proverb All's well that ends well, which means that problems do not matter so long as the outcome is good.