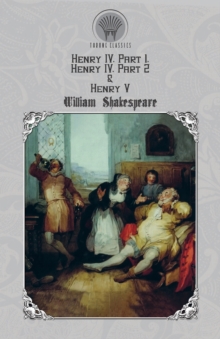 Henry IV, Part 1 is a history play by William Shakespeare, believed to have been written no later than 1597. It is the second of Shakespeare's tetralogy that deals with the successive reigns of Richard II, Henry IV (2 plays), and Henry V. Henry IV, Part 1 depicts a span of history that begins with Hotspur's battle at Homildon against the Douglas late in 1402 and ends with the defeat of the rebels at Shrewsbury in the middle of 1403. From the start it has been an extremely popular play both with the public and the critics.

Henry IV, Part 2 is a history play by William Shakespeare believed to have been written between 1596 and 1599. It is the third part of a tetralogy, preceded by Richard II and Henry IV, Part 1 and succeeded by Henry V.

The play is often seen as an extension of aspects of Henry IV, Part 1, rather than a straightforward continuation of the historical narrative, placing more emphasis on the highly popular character of Falstaff and introducing other comic figures as part of his entourage, including Ancient Pistol, Doll Tearsheet, and Justice Robert Shallow. Several scenes specifically parallel episodes in Part 1.

Henry V is a history play by William Shakespeare, believed to have been written near 1599. It tells the story of King Henry V of England, focusing on events immediately before and after the Battle of Agincourt (1415) during the Hundred Years' War. In the First Quarto text, it was titled The Cronicle History of Henry the fift, which became The Life of Henry the Fifth in the First Folio text.

The play is the final part of a tetralogy, preceded by Richard II, Henry IV, Part 1, and Henry IV, Part 2. The original audiences would thus have already been familiar with the title character, who was depicted in the Henry IV plays as a wild, undisciplined young man. In Henry V, the young prince has matured. He embarks on an expedition to France and, his army badly outnumbered, defeats the French at Agincourt.