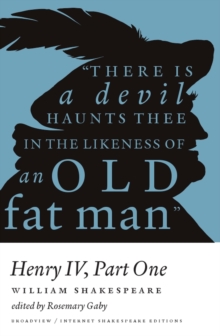 Henry IV, Part One has been one of Shakespeare's most popular plays since it was first produced, and was reprinted several times during the playwright's lifetime.

The play encompasses the tragic pathos of Hotspur's death, the thrill of Hal's battlefield valour, the intrigue of power politics, and the broad humour of tavern scenes.

It has been performed as a play that celebrates England and engenders national pride, but also as a play that thumbs its nose at patriotism and notions of empire.

This Broadview Edition provides a discussion of the play's performance history, and both the introduction and footnotes encourage readers to think about the play as a performance text.

The appendices gather a selection of historical sources and contemporary philosophical and political writings from England and Europe, and interleaved pages throughout the play provide illustrations and extended discussion of key phrases, plot points, and allusions in the text.

Further historical and performance materials are available on the Internet Shakespeare Editions website.