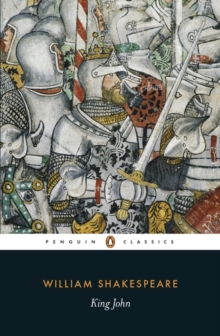 King John - today remembered as the villainous opponent of Robin Hood and the Magna Carta - was for Shakespeare and his audience a heroic figure who stood up to England's enemies.

This Penguin Shakespeare edition is edited by R. L. Smallwood with an introduction by Eugene Giddens. 'This England never did, nor never shall,Lie at the proud foot of a conqueror'Under the rule of King John, England is forced into war when the French challenge the legitimacy of John's claim to the throne and determine to install his nephew Arthur in his place.

But political principles, hypocritically flaunted, are soon forgotten, as the French and English kings form an alliance based on cynical self-interest. And as the desire to cling to power dominates England's paranoid and weak-willed king, his country is threatened with disaster. This book contains a general introduction to Shakespeare's life and Elizabethan theatre, a separate introduction to Richard II, a chronology, suggestions for further reading, an essay discussing performance options on both stage and screen, and a commentary. William Shakespeare (1564-1616) was born to John Shakespeare and Mary Arden in late April 1564 in Stratford-upon-Avon.