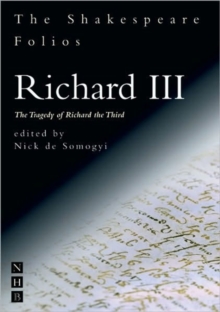 This brand new edition accurately reproduces the First Folio of the plays of William Shakespeare (1623) letter for letter, dot for dot, but does so in modern type.

At a stroke, the dust of ages is blown away and what Shakespeare actually intended is revealed to modern readers.

With no editorial interference - but also with no quaint typographical quirks - Shakespeareans everywhere, students, actors, directors, can see for themselves what the Folio really says.

As a further aid to understanding, on each opposite page, the same text appears but this time in a fully modernised version.

This modern edition offers a useful safety net whenever the Folio becomes problematic.

Each volume, scrupulously edited by Shakespeare scholar Nick de Somogyi, also contains two introductions - one to the series, one to the particular play - textual notes, an appendix giving variant versions from the Quarto where appropriate, and a facsimile page from the First Folio.